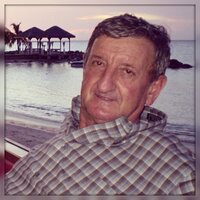 It is with deep sadness and heavy hearts that we announce the peaceful passing of our father Sergio, the Sault Area Hospital on Tuesday, November 16, 2021 at the age of 79.  He is now reunited with his beloved wife, Anna. Loving father of Marcellina Sinclair (Elvis), Alessandro Marson and Andrew Marson (Kelly). Cherished Nonno of Sergio, Nicholas, Sophia, Luca, Farrah and Adrian. Predeceased by his parents Mario Marson and Marcellina Colussi. Brother of the late Franco Marson (Yvonne) and late Alessandro. Predeceased by his father-in-law and mother-in-law Vincenzo Iezzi and Maria Grazia Cunsolo. Brother-in-law of the late Caterina and Giovanni Mannello, late Maria Iezzi, late Domenico Iezzi (Giulia), late Nicola Iezzi (Chiara), late Pino Iezzi (Teresa), late Antonio Iezzi (Janet), late Francesco Iezzi and late Anna Iezzi. Uncle Sergio will be fondly remembered by his many nieces and nephews in Canada and Italy.

In his earlier years, he proudly served with the Alpini – the Italian Army Mountain Infantry and continued his connections with the Canadian group long after. Before immigrating to Canada from Casarsa della Delizia he worked in Germany and traveled Europe on his motorcycle with his brother and friends. We will always cherish the many stories he had to share. So proud of his heritage, he was also a member of the Fogolar Furlan Club here in Sault Ste. Marie. As a skilled blacksmith and welder by trade, he worked hard and sacrificed for his family. After retiring from China Steel he and our mother enjoyed winter vacations with good friends/ neighbours to the Caribbean. Throughout our childhood he always made time for his family: all of our crazy pets, taking us to music lessons, vacations, and of course, our traditional Sunday outings will never be forgotten.

Friends and family are invited to visit at Northwood Funeral Home Cremation and Reception Centre (942 Great Northern Road 705-945-7758) on Monday, November 22, 2021 from 10:30 a.m. until 11:30 a.m. Masks and social distancing are required. The use of hand sanitizer is appreciated. A private family service will be held with Father Trevor Scarfone officiating. Entombment at Holy Sepulchre Cemetery Mausoleum. Our father supported several charities throughout his life, at this time, memorial donations to the Canadian Lung Association would be appreciated by the family.