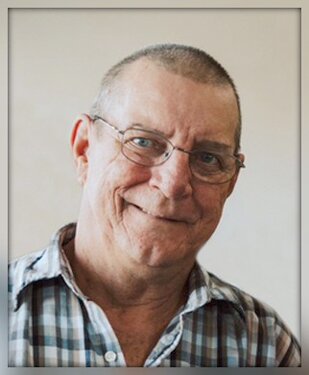 Please share a memory of Vincent to include in a keepsake book for family and friends.
View Tribute Book

It is with the heaviest of hearts we announce the death of Vinnie in his 70th year at home with his beloved wife at his side after a long courageous battle with cancer. Husband and soulmate of Tammi for 21 years. Loved father of Chris Bishop, late Christine Paquette and the late Michael Paquette (Erin). Proud grampa of Ella Paquette and Makayla Legge. Great grandfather of Lincoln Legge. Fur-dad of Paradise (the dog he never wanted but loved).

Vinnie or Vinniequa as he was mostly known, worked for CP Express for many years until he injured his back. He then went to work for Uncle Verne at Verne’s Hardware until he retired at the age of 55. His cousin Katy made his job a pleasure. Vinnie was a people person. He loved to talk and laugh so both these jobs were perfect for him!

In the early years he enjoyed playing and coaching baseball, bowling, golf and camping. He was a life fan and season ticket holder of the Soo Greyhounds. He faithfully followed the Toronto Maple Leafs and the Toronto Blue Jays!

Vinnie was happiest at his trailer at Fred’s Trailer Park in Richards Landing. It was here that he asked his wife and soulmate Tammi to come for the weekend and she never left. He was known as the Sheriff of the park because he knew everyone and everything going on. He and Dora (his park wife) were inseparable while Tammi would be at work. They were often found playing washer toss and they were the champions in the park, or off sitting at someone’s fire having a drink and it would be a toss up of who would help who home at the end of the night.

His family was the thing he treasured the most. He never missed a call on your birthday. It was because of his family he fought so long, especially his girls Tammi, Ella, Erin and Makayla. Although he was estranged from his son Chris, he never stopped loving him. He is now reunited with those he loved that have gone before him. We all have another Angel watching over us.

Per Vinnie’s request there will be no funeral service. Interment will take place in June and a celebration of life at Fred’s Trailer Park to follow.

A special thank you to our nurse Amy Shoust, Dr. Apostle, the doctors and nurses from the dialysis unit and oncology unit. Dr. Culina and Manuel and staff at the Medicine Shoppe Great Northern Road for all the care and for putting up with Vinnie.

An education fund will be started for Vinnie’s great grandson, Lincoln, and donations via cheque made payable to Tammi Merrifield are appreciated and will be accepted at Northwood Funeral Home Cremation and Reception Centre (942 Great Northern Rd, 705-945-7758).