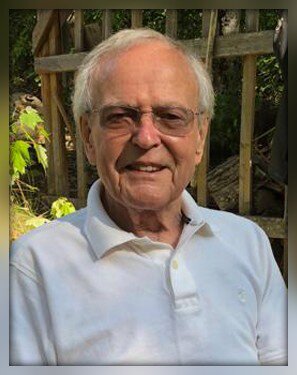 Please share a memory of Norman to include in a keepsake book for family and friends.
View Tribute Book

Peacefully passed away surrounded by his loving family, at the Algoma Residential Community Hospice (ARCH) on Friday, August 5, 2022 at the age of 87 years. He is now reunited with his beloved wife Roberta Fay (2020). He will be missed by his beautiful and loving children Jim (Pam) of North Carolina, Jane Porter (Duncan) of Vancouver, and Nancy McKinnon. Proud grandfather of Brock & Braeden of North Carolina, Cameron (Amanda), Madyson & Jeanne of Vancouver, and Megan. Brother of the late Dr. James MacIntosh (late Ruth) and the late Jean MacLeod and survived by his sister-in-law Patricia. Norm will be fondly remembered by his many nieces and nephews.

Norm was born and lived his life in Sault Ste. Marie, leaving only to attend Queens University graduating in 1957 with a degree in mechanical engineering. He was employed by Algoma Steel for the majority of his working years retiring in 1990 as divisional superintendent of services. Post retirement Norm spent four years with Dawson and Keenan selling insurance and then volunteered his time with the Ontario Parole Board for the next five years.

Norm most loved his time spent at the cottage with family and friends boating, hunting and entertaining.

Respecting Norm’s wishes inurnment will take place later in September when the family can be together followed by a celebration of life for both him and Fay, details to be announced at a later date. Memorial donations to ARCH or the Sault Area Hospital Foundation would be greatly appreciated by the family.

We would like to thank the staff and volunteers at the Sault Area Hospital and ARCH for the kindness and excellent care they provided to our father in his final days.  Special thanks and gratitude to Dr. Murdoch, Dr. Culina, Dr. Apostle, Heather, Erica, Sophia and Penny.