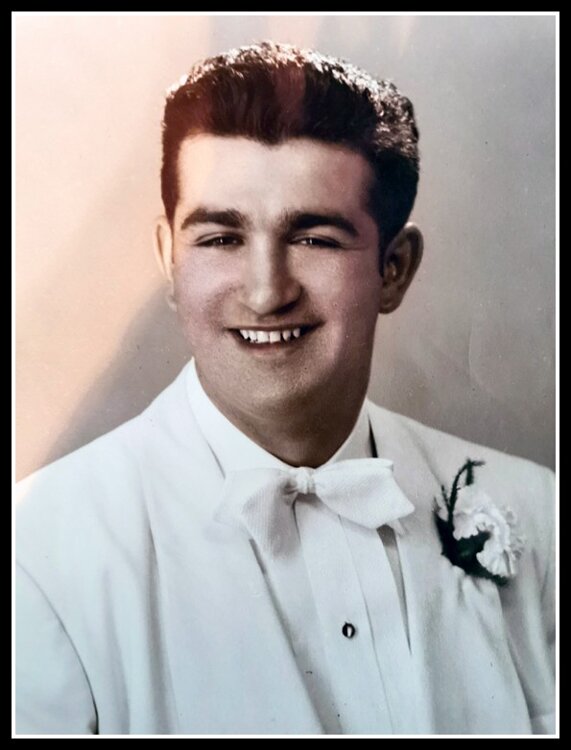 Please share a memory of James to include in a keepsake book for family and friends.
View Tribute Book

Passed away after a lengthy battle at the FJ Davey Home on Friday, August 19, 2022 at the age of 92, eight weeks shy of his 93rd birthday. He leaves behind his three children Patty, Debbie and Dan (Cheryl), his two grandchildren Marissa (John) and Page, and his one greatgrandchild Cayden. He was born and raised in Sault Ste. Marie by his parents Frances Fera and Eugene (Jim) Caputo with his two brothers Joseph G. (Marie) and Frank R. (Linda). He will be fondly remembered by his nieces and nephews.

He met his wife Page Infanti in Sault Ste. Marie and were married in Sault Ste. Marie in 1953. They had 3 children. He has been described as an innovator in his business ventures and a daredevil (a cat with 9 lives!). He was employed as a plumber, pipefitter and was responsible for installing the plumbing and heating in the homes in Elliot Lake when it was a boom town. He developed Margaret Heights Subdivision and was the owner operator of Landslide Trailer Park for 51 years. He loved flying his Aeronca Sedan float plane and had a love for dogs, horses and nature. Famous for fast boats and fast cars. He also helped save lives when the luxury steamer Hamonic burned to the water line. He was 14 years of age and was held in high esteem for his courageous efforts, his giggle, he was always an inspiration and a whole lot of fun. His friends will miss him.

Friends and family are invited to visit at Northwood Funeral Home Cremation and Reception Centre (942 Great Northern Rd, 705-945-7758) on Friday, August 26, 2022 from 9:30 a.m. until the time of the funeral service in the chapel at 11:00 a.m. Interment at Holy Sepulchre Cemetery. The family asks that you plant a tree in James’ memory. His family would like to thank the staff at the FJ Davey Home and his dedicated PSW workers on Cedar Grove 2. A heartfelt thank you to Fran Conley.