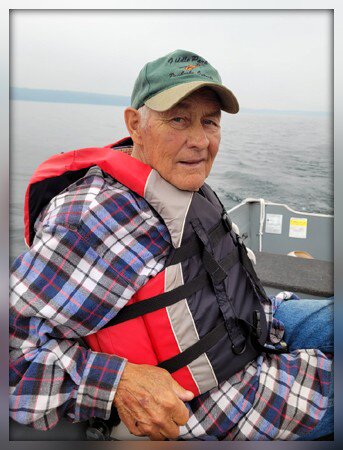 It is with heavy hearts that we announce the unexpected passing of Doug on Tuesday, January 17, 2023. Doug passed in his happy place, at camp on St. Joseph Island, in his 74th year.

He leaves behind his best friend and the love of his life Brenda (nee Hammell) of 52 years along with his sons, Ryan (Erin) and Corey (Ashley). He was the proud Grampie to his little hockey stars and fishing buddies, Keeley, Grady, Lauryn and Logan.

Doug was born on April 22, 1949 in Richards Landing to the late Harold and the late Coyla Brown. Brother of Debbie Pritchard (Eric) and the late Sharon Brown. Son-in-law of the late Bob and the late Beryl Hammell. Brother-in-law of Greg Hammell (Sue), Val Irving and Tracy Hammell. Uncle Doug will be fondly remembered by his many nieces and nephews.

Our dad was an avid collector of antique tractors, with a collection that outnumbered his grandchildren. He loved fishing, hunting, woodworking, watching his grandchildren play hockey, camping at Basswood, making maple syrup, working at his sawmill, playing his guitar and planting his garden. A special thanks to his camp buddies who were always looking out for him.

As per Doug’s wishes, cremation has taken place so now the old fella will always be warm. A spring interment and celebration of life to be announced at a later date. Memorial donations to the Royal Canadian Legion Branch 374 or the charity of your choice would be greatly appreciated by the family. Arrangements entrusted to Northwood Funeral Home Cremation and Reception Centre (942 Great Northern Rd, 705-945-7758).

In true Doug fashion, please enjoy a beer and share a story.

Keep on pick’n and a strummin’.